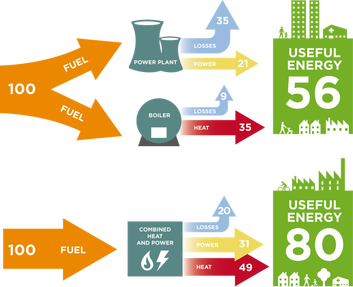 What is Combined Heat and Power?
Combined heat and power (CHP) integrates the production of usable heat and power (electricity), in one single, highly efficient process.

CHP generates electricity whilst also capturing usable heat that is produced in this process. This contrasts with conventional ways of generating electricity where vast amounts of heat is simply wasted.

In today’s coal and gas fired power stations, up to two thirds of the overall energy consumed is lost in this way, often seen as a cloud of steam rising from cooling towers. 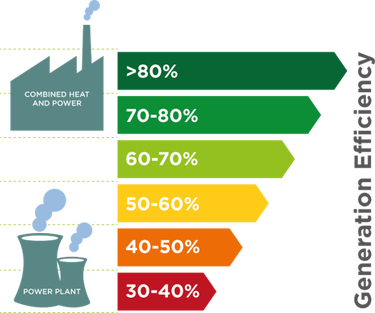 CHP is fuel neutral
As an energy generation process, CHP is fuel neutral. This means that a CHP process can be applied to both renewable and fossil fuels. The specific technologies employed, and the efficiencies they achieve will vary, but in every situation CHP offers the capability to make more efficient and effective use of valuable primary energy resources.

•It can either replace or supplement conventional separate heat and power.
•Instead of purchasing electricity from the local utility company and burning fuel (oil, gas etc) in an on-site furnace or boiler to produce thermal energy. This can be taken care of  by an industrial or commercial facility can use CHP to provide both energy services in one energy-efficient step. from the EPA website.
•Reduces the negative impact to the environment
•Saves the consumer money
•Also known as co-generation
Personal Energy Systems:
The idea of a personal energy system is pure genius. You put a few solar panels on the roof and harness excess electricity for use at night. Your home could be completely detached from the energy company.

•is the small-scale generation of heat and electric power by homes (also small businesses and small communities) to meet their own needs.
•It is an alternative or can supplement traditional centralized grid-connected power.
•Lower negative impact on the environment
•Lower costs for the consumer
•High initial capital cost
•also known as micro-generation 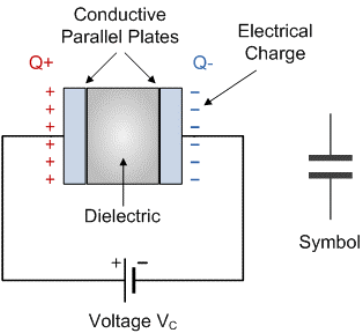 Batteries and Capacitor
A capacitor is a passive two-terminal electrical component used to store electrical energy temporarily in an electric field. The forms of practical capacitors vary widely, but all contain at least two electrical conductors (plates) separated by a dielectric (i.e. an insulator that can store energy by becoming polarized).
​A  capacitor charges and discharges. It holds charge temporarily.
It fills and empties; much like a bucket of water. It then refills and empties again. When it empties it passes its charge into the circuit.