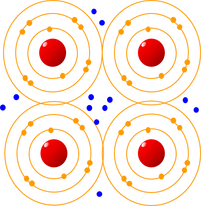 ​​Metallic bonding involves sharing outer electrons but these are freer and they can flow through the crystalline structure.  The bonding is caused by attraction between the positively charged metal atom nuclei and the negatively charged cloud of free electrons, and is spread throughout the lattice – “positively charged nuclei in a sea of electrons”.
​Pure and alloyed metals exist as crystals.  Metals, many ceramics and some polymers have a uniform, geometrical arrangement of atoms or ions that is repeated throughout the material and are therefore said to be crystalline.  This regular 3-D atomic pattern is known as the space lattice and the unit cell is the smallest unit of the lattice that retains the overall characteristic of the lattice.  The crystal structure refers to the size, shape and atomic arrangement of the lattice unit cell and varies from one substance to another.   Crystals are regular arrangements of particles (atoms, ions or molecules).
​Grain size
Solidification of a metal is achieved by a process of nucleation and growth. When a pure, molten metal is cooled to just below its freezing temperature minute nuclei of the solid first form in the liquid.
The structure of iron atoms isn't continuous throughout the entire paper clip. When a metal cools and is transitioning from liquid to solid, its atoms come together to form tiny grains, or crystals. Even though the crystalline structure does not continue from crystal to crystal, the crystals are bound to one another.
The solidification of metals is that it is not sudden throughout the entire liquid. As molten pure metal solidifies, crystals (nuclei) start to form and these crystals grow by the addition of atoms to form a dendrite which as can be seen is a crystal skeleton with a backbone from which arms grow in other directions, fixed by the regularity of the unit cell.
​The crystals found in all commercial metals are commonly called grains because of this variation in external shape. The area along which crystals meet, known as the grain boundary, is a region of mismatch. The boundaries are formed by materials that are not part of a lattice, such as impurities, which do not show a specific grain pattern. This leads to a noncrystalline (amorphous) structure at the grain boundary with the atoms irregularly spaced. Since the last liquid to solidify is generally along the grain boundaries, there tends to be a higher concentration of impurity atoms in that area.
​Reheating a solid metal or alloy allows material to diffuse between neighbouring grains and the grain structure to change. Slow cooling allows larger grains to form; rapid cooling produces smaller grains. Directional properties in the structure may be achieved by selectively cooling one area of the solid.
​The rate of cooling of a molten metal will determine the grain size. Gradual cooling leads to only a few nuclei being formed and therefore a large grain size, whereas rapid cooling will result in many nuclei and small grain size.
http://www.ehponline.org/members/2006/114-8/innovations.html
​Plastic deformation:   The permanent deformation of a solid subjected to a stress.
Plastic deformation: materials remain deformed after a load is added and then removed.
Elastic deformation of a metal is a small change in shape at low stress which is recoverable after the stress is removed. This type of deformation involves stretching of the metal bonds, but the atoms do not slide past each other.

Plastic deformation occurs when the stress is sufficient to permanently deform the metal. This type of deformation involves the breaking of bonds, usually by the movement of dislocations.

​Plastic deformation results in the formation of more dislocations in the metal lattice. This can result in a decrease in the mobility of these dislocations due to their tendency to become tangled or pinned. Plastic deformation at temperatures low enough that atoms cannot rearrange (cold-working), can strengthen a metal as a result of this effect. One side effect is that the metal becomes more brittle. As a metal is used, cracks tend to form and grow, eventually causing it to break or fracture.
Tensile strength:   The ability of a material to withstand pulling forces.
Work hardening is an increase in the hardness of metals as a result of working them cold.  It causes a permanent distortion of the crystal structure and is particularly apparent with iron, copper and aluminium etc whereas with lead and zinc it does not occur as these metals are capable of re-crystallizing at room temperature. (Small grain size).

​Cold Working:
Because plastic deformation results from the movement of dislocations, metals can be strengthened by preventing this motion. When a metal is bent or shaped, dislocations are generated and move. As the number of dislocations in the crystal increases, they will get tangled or pinned and will not be able to move. This will strengthen the metal, making it harder to deform. This process is known as cold working. At higher temperatures the dislocations can rearrange, so little strengthening occurs.
​Alloy:   A mixture that contains at least one metal. This can be a mixture of metals or a mixture of metals and non-metals.