​The drivers for cleaning up manufacturing can be divided up into three basic groups:
1.Social
2.Political
3.Economical
International legislation and targets for reducing pollution and waste

In Europe 16 tonnes of material is used per person per year, of which 6 tonnes become waste.

Just in terms of household waste alone, each person in Europe is currently producing, on average, half of tonne of such waste. Only 40 % of it is reused or recycled and in some countries more than 80% still goes to landfill.
​
If we re-manufacture, reuse and recycle, and if one industry's waste becomes another's raw material, we can move to a more circular economy where waste is eliminated and resources are used in an efficient and sustainable way.
​
Turning waste into a resource is one key to a circular economy. The objectives and targets set in European legislation have been key drivers to improve waste management, stimulate innovation in recycling, limit the use of landfilling, and create incentives to change consumer behaviour.

Clean technology
While there is no standard definition of "clean technology," it has been described as "a diverse range of products, services, and processes that harness renewable materials and energy sources, dramatically reduce the use of natural resources, and cut or eliminate emissions and wastes." [...] "Clean technologies are competitive with, if not superior to, their conventional counterparts. Many also offer significant additional benefits, notably their ability to improve the lives of those in both developed and developing countries"
[http://cleanedge.com/about]

Drivers for Clean Technology
Its origin is the increased consumer, regulatory, and industry interest in clean forms of energy generation—specifically, perhaps, the rise in awareness of global warming, climate change, and the impact on the natural environment from the burning of fossil fuels.
[https://en.wikipedia.org/wiki/Clean_technology]

Drivers for cleaning up manufacturing include promoting positive impacts; ensuring neutral impact or minimising negative impacts through conserving natural resources; reducing pollution and use of energy; reducing wastage of energy and resources.
​
End of pipe techniques
​
Definition:
Methods used to remove already formed contaminants from a stream of air, water, waste, product or similar. These techniques are called 'end-of-pipe' as they are normally implemented as a last stage of a process before the stream is disposed of or delivered.

Technologies such as scrubbers on smokestacks and catalytic convertors on automobile tailpipes that reduce emissions of pollutants after they have formed.
In economic terms, it is cheaper to prevent any potential environmental damage and deal with the issues at the source rather than try to mitigate their effects after the offending emissions, waste or inefficiencies have already occurred.
These pollutant reducing measures are often less dramatic and smaller in scale than their end of pipe counterparts. 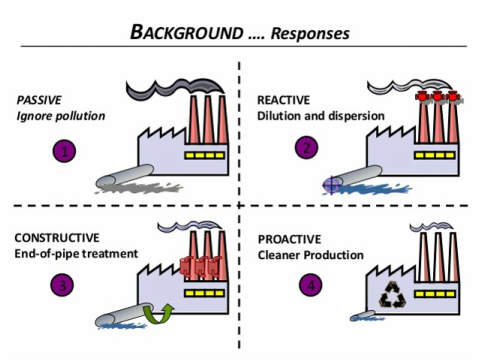 ​They gave the name end-of-pipe (EOP) to the method that was being urged by lazy polluters who wanted to make no basic changes.
Imagine a pipe with chemical waste that is discharging pollution into a river. Do you add a treatment box onto the end of the pipe and try to mitigate the worst features of what is pouring out, such as filtering it or treating it with additional chemicals.
Or...
do you go back to the process that produces that pollution and research why it is being produced, then change the process so that the discharge no longer occurs?