​Plastics are polymers, but polymers don't have to be plastics. The way plastics are made is actually a way of imitating nature, which has created a huge number of polymers. Cellulose, the basic component of plant cell walls is a polymer, and so are all the proteins produced in your body and the proteins you eat. Another famous example of a polymer is DNA - the long molecule in the nuclei of your cells that carries all the genetic information about you.

People have been using natural polymers, including silk, wool, cotton, wood, and leather for centuries. These products inspired chemists to try to create synthetic counterparts, which they have done with amazing success.
​•Technically plastics are referred to as Polymers
•Petro-chemicals are the main ingredient for modern day plastics.
•Roughly 8% of oil production is due in plastics
•The raw material for plastics (mainly oil) is extracted in a country, exported to other countries where conversion to plastics takes place and these are re-exported at considerable added value. (Int Mind)
•Biomass – such as polylactic acid (PLA) resin which is made from corn or potato starch – is also biodegradable.
•Interesting note on compostability of PLA 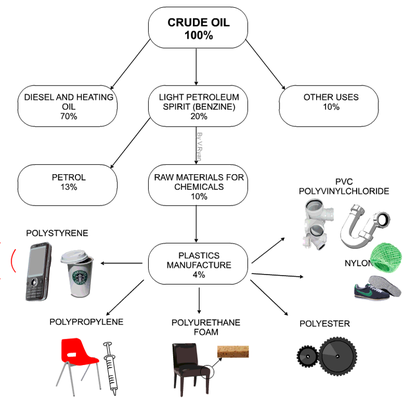 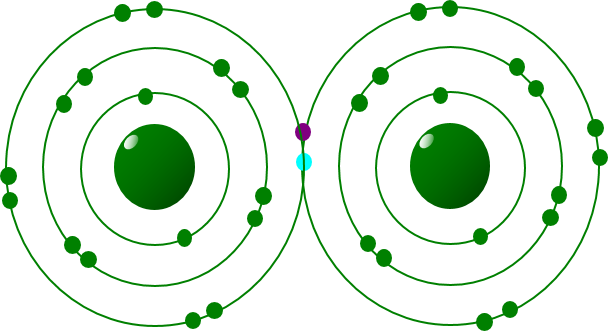 Secondary Bonds
Secondary bonds are weak forces of attraction between molecules that exist in substances such as water.   Water is formed by polar covalent bonds (Polar Covalent bonds - electrons shared unequally, resulting in a partial negative/positive charge), which determine the arrangement of water molecules. 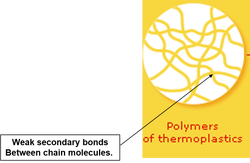 ​Thermoplastics are linear chain molecules with weak secondary bonds between the chains.
​A thermoplastic is a plastic that melts to a liquid when heated and freezes to a brittle, very glassy state when cooled sufficiently. Most thermoplastics are high molecular weight polymers whose chains associate through weak Van der Waals forces (e.g. polyethylene); stronger dipole-dipole interactions and hydrogen bonding (nylon); or even stacking of aromatic rings (polystyrene).
Thermoplastic polymers differ from thermosetting polymers (Bakelite; vulcanized rubber) as they can, unlike thermosetting polymers, be reheated and remoulded. Many thermoplastic materials are addition polymers; e.g., vinyl chain-growth polymers such as polyethylene and polypropylene.

Thermoplastics have long, linear polymer chains that are only weakly chemically bonded, or connected, to each other.
When a thermoplastic object is heated, these bonds are easily broken, which makes the polymers able to glide past each other like strands of freshly cooked spaghetti. That's why thermoplastics can readily be remoulded.
The weak bonds between the polymers reform when the plastic object is cooled, which enable it to keep its new shape.
​
Thermoplastics are easy to recycle since they can be melted and reshaped into other products.
For example, a plastic bottle that contained a soft drink could be reformed into the fibres of a fleece jacket. 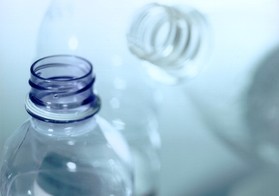 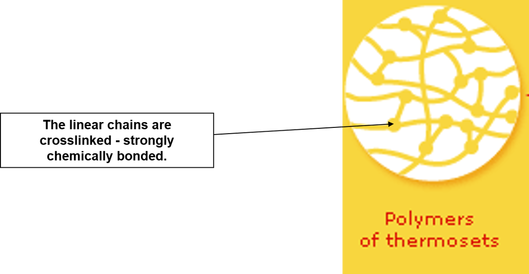 ​Thermosets are linear chain molecules with strong primary bonds between adjacent polymer chains. This gives thermosets a rigid 3D structure.
​The linear chains are crosslinked - strongly chemically bonded. This prevents a thermoplastic object from being melted and reformed.

Just as a raw egg has the potential to become a boiled egg, a fried egg, and so on, thermosetting polymers have the potential to become all sorts of different objects.
​Once an egg has been boiled, however, you can't make it into a fried egg. In the same way, once a thermosetting plastic object has been formed, it can't be remade into a different object.

Although PVC disposal is problematic, PVC is still widely used as a structural material, for example, in windows and for guttering and drainpipes.

Plastic facts in the UK:
Plastic disposal problems
Incineration:
Energy can be obtained from burning waste, but this is less energy than can be saved by recycling. In addition:
Plastics and the environment
There are environmental impacts from plastic production, plastic use and plastic waste disposal. Plastic containers are now lighter than they used to be, using less material, but our consumption of plastic is still set to rise. The building blocks of plastic, known as monomers, are made from oil and gas (plastic production uses 8% of the world oil production each year). To make the various polymers used by industry for various uses (for example, PET for plastic bottles, polystyrene, PVC) many chemicals are used which have not undergone a risk assessment.

The PVC waste crisis (from Greenpeace  http://archive.greenpeace.org/toxics/html/content/pvc3.html#recycle)
The world is facing a waste crisis from PVC. Short-life PVC products, disposed of within a few years, have caused serious PVC waste problems, especially when incinerated.
The average life span of the durable products -which make up more than half of PVC consumption - is around 34 years. Durable vinyl goods produced and sold since the 1960s - when the plastic boom began - are now just starting to enter the waste stream. We are only now seeing the first stages of an impending PVC waste mountain.
There are currently over 150 million tonnes of long-life PVC materials in existence globally, used mostly in the construction sector, which will constitute this waste mountain in coming decades. Taking into account the ongoing growth in production, by the year 2005 this amount will double and the world will have to deal with approximately 300 million tonnes of PVC starting to enter the waste stream. The amount of PVC waste arising in industrialised countries is already expected to grow faster than PVC production.
​So what do we do with this waste? Is there a solution? Since PVC, like most plastics, does not biodegrade quickly, three primary options exist: bury it, incinerate it or recycle it.
PVC Recycling
In the late 1980s, PVC recycling was promoted by the vinyl industry in order to make PVC more acceptable to the public and to prevent government action to limit PVC production and use. As a result, the general public and decision-makers are now accepting recycling as a technical solution to the environmental problems associated with PVC. This is especially the case in countries with advanced recycling policies, like Denmark, Germany, the Netherlands and the USA.

In reality, Greenpeace has found that PVC recycling in the main PVC consuming regions of the world amounts to less then one per cent of consumption. According to independent research, for 70 - 85% of PVC waste, recycling is not even an option for the mid to long term. This means hundreds of thousands of tonnes of PVC waste are destined to become waste in the near future creating a growing disposal problem.